The Mesa Prieta Petroglyph Project proudly presents or Virtual Tours series. In these online tours, you we be able to explore the Mesa as never before, from the comforts of your own home. Each of these tours will cover a unique perspective on a theme about the petroglyphs, archaeology, and history of Mesa Prieta. Each "stop" includes a narrative about the petroglyphs shown to accompany a virtual reality (VR) enabled photograph or model. For a more immersive experience, you can view these VR-enabled tour stops using any VR-capable device, such as a smartphone or tablet.

In this virtual tour, we boast about the Mesa's finest feathers: petroglyphs of parrots and raptors. This tour is also available as a short narrated video, first presented at the 2021 American Rock Art Research Association conference. Feel free scroll down and interact with each of the stops featured in the video, pause it to take in the scene, or leave the audio play as you experience each iteration of the parrot motif yourself.

The first stop on this tour is a nearly-linear composition of several elements, including at least three bird images. From left to right there is a turkey, a possible foot with an extended big toe, a masked figure, an unidentified bird, and finally a rendition of the "bird-on-a-stick" motif. This last motif is seen elsewhere along the Northern Rio Grande, and many suspect it to be a depiction of a taxidermied parrot mmounted onto the top of a ceremonial stick, sceptre, or staff. Complicating the matter of this motif's subject, archaeological studies of macaw bones from earlier Ancestral Pueblo sites in Chaco Canyon and its outliers (Aztec and Salmon Ruins) indicate that there is no evidence of macaws being processed in the way necessary to stuff and mount them. This evidence leads us to an alternative hypothesis, that the "bird-on-a-stick" motif is a visual shorthand to indicate "parrot feather" + "staff," or the use of only the macaw parrot's feathers​ to adorn the ceremonial object.

This small image of a parrot was first documented by Polly Schaafsma several decades ago during a statewide survey of petroglyphs and other similar visual expressions. It has the characteristic hooked beak of parrot images, and lacks the prominent and elaborate tail and primary feathers typical of depictions of turkeys. Like most (but not all) parrot/macaw images, it is distinguished from raptors (eagles, hawks, ospreys, turkey vultures, and condors) because it is rendered fully in profile, while raptors are typically rendered with the body front-on and only the head in profile.

Some renderings of macaws are more elaborate than others. This example is comprised of five areas of different area filling techniques, including open, infilled, and filled with geometric patterns such as lines and dots. The different fill strategies likely indicate different colored feathers, circumventing the apparent limitations of the petroglyph medium. Above the parrot, there is another motif shared by the Southwest and Mesoamerica: a knifewing. The knifewing was a lengendary bird that accompanied warriors into battle.

This elaborate panel hints at some of the cultural significance macaws held in the Pueblo world. Notice the two "step pyramid" shapes, one upright and one inverted. These are renditions of the "cloud terrace" motif, a stylized method of rendering stormclouds. Another, brighter cloud motif in a different style is rendered to the far left of the panel. To the right, the double ended arrow is a manner of depicting lighting. Above the lightning arrow sprouts a corn stalk, and above flies a macaw. In the higher resolution image of this same panel below, see if you can find the second parrot. 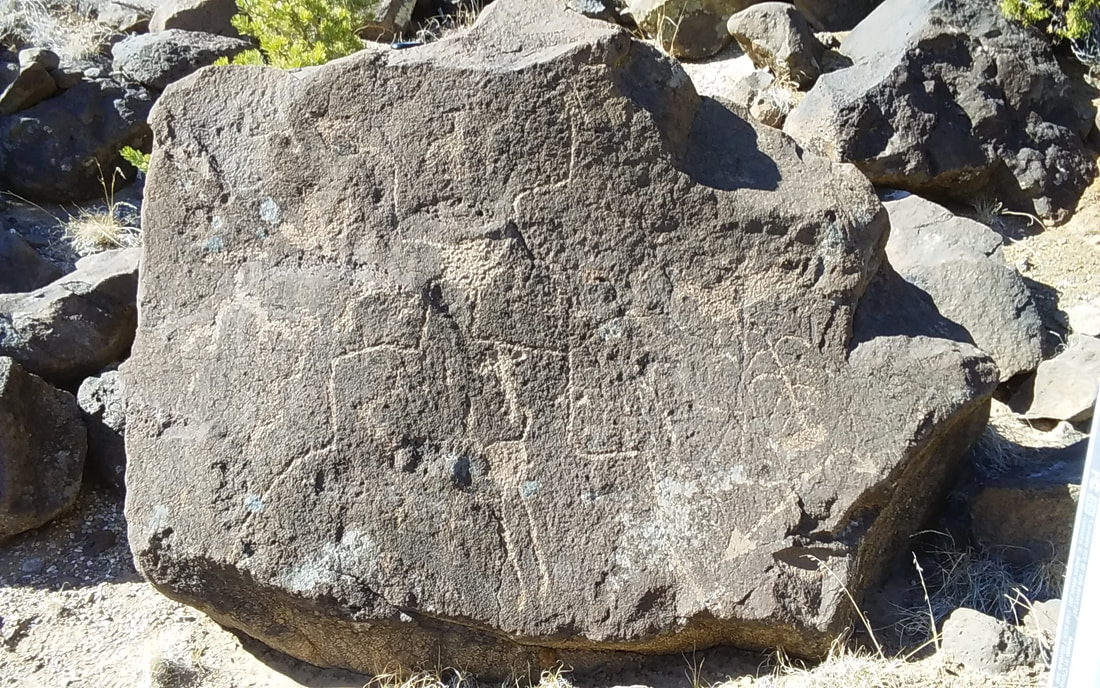 Our final stop overlooks the "Bosque," or forest that follows the banks of the Rio Grande River along the foot of Mesa Prieta. This stop may look familiar, as it is one of the stops along one of our most popular trails. To begin with, the images facing us appear clear but difficult to discern, so it's best to break these down. Aside the the sparse (and likely ritual) pecking, the most prominent petroglyph is actually two related and touching elements. Towards the center of the view is a "naturalistic" rendering of a parrot seen in profile, with prominent tail feathers and a curved beak. This touches the abstract geometric design to the right of center, the element with an "X" shape in it. Closer inspections shows that these are different styles displaying the same subject, with the latter being an "iconographic" macaw (recognizable by its hooked beak) that mimics the shape of the naturalistic macaw in an instance of visual punning. Now look at the 3D model below. Notice how this panel adorns the top of a boulder that overhangs another prominent and familiar panel... the animal flute player that gives us our logo! By overhanging the flute player, the boulder with the pair of parrots not only cast a shadow that marks the equinox, but also can freely "ring" when struck in the manner used to make petroglyphs, making it a "lithophone" aka a ringing rock. Finally, see if you can spot the 3rd parrot here.

These web-based virtual tours are made possible by generous grants from the National Endowment for the Humanities (NEH) and the New Mexico Humanities Council (NMHC).
Select a different virtual tour (return to virtual tours home page)